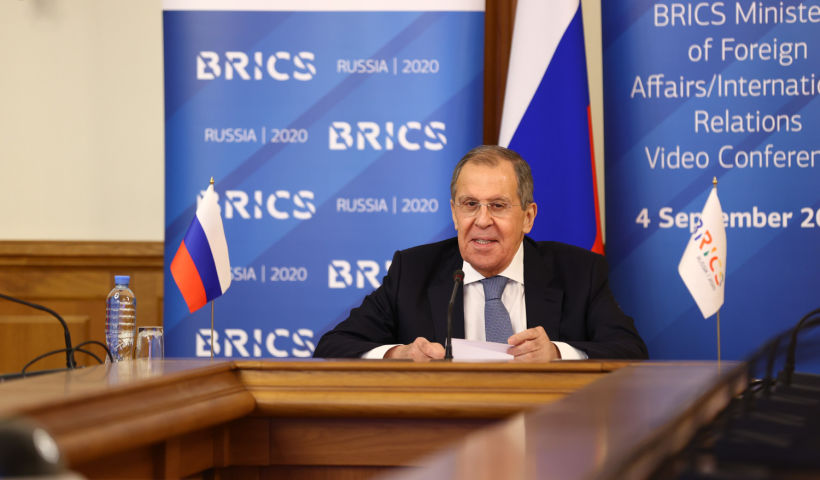 At the event, the Ministers held an in-depth exchange of views on topical international issues, including regional conflicts, joint efforts to counter new challenges and threats, and cooperation of the BRICS nations in multilateral fora, in particular, at the forthcoming 75th anniversary session of the UN General Assembly. They conducted a comprehensive analysis of the current condition of pentalateral cooperation during Russian BRICS Chairmanship in 2020 on all three pillars of BRICS Strategic Partnership – policy and security, economy and finance, and people-to-people cooperation.

The meeting participants discussed some issues of the preparations for the 12th BRICS Summit.

They approved a Joint Media Statement following the meeting. 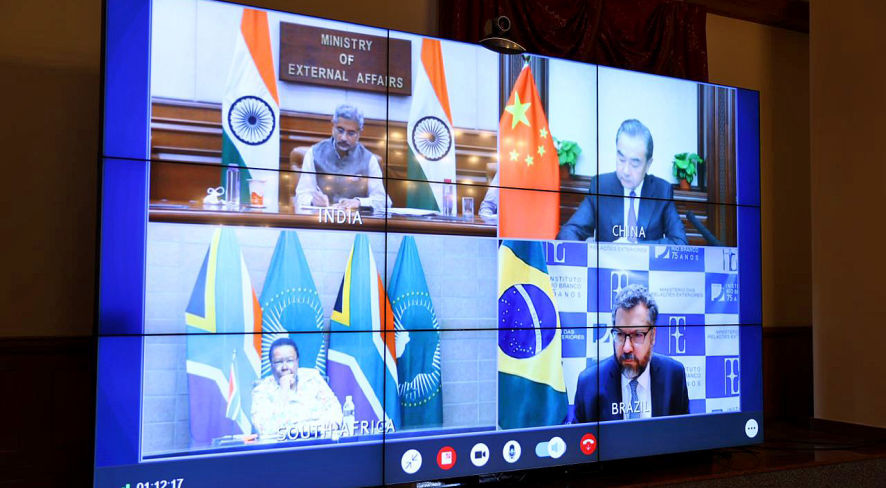 Welcome to the BRICS Foreign Ministers Council meeting which, for obvious reasons, is being held as a videoconference, but is no less important because of that. I’m convinced we will be able to resume face-to-face meetings soon.

BRICS has established itself as an influential factor in international politics and economy. Our strategic partnership is based on commitment to dialogue, multilateralism, sovereign equality of states and the UN Charter principles.

This year, as we celebrate the creation of the UN and the 75th anniversary of Victory in World War II, which we celebrated earlier, our common collective voice in support of the democratic multipolar international order is needed more than ever. This order is based on mutual respect for the legitimate interests of all states, non-interference in their domestic affairs, and respect for the norms and principles of international law.

The role of the states, that are part of our association, in global trade and global economic growth is steadily increasing. In 2020, the total GDP of the five countries amounted to 25 percent of the global GDP ($21 trillion), and the share in international trade stood at almost 20 percent ($6.7 trillion). Particularly important is the fact that mutual exports of our five countries has grown by 45 percent over the past five years.

This trend will continue into the future regardless of the global coronavirus crisis, which is corroborated by the ongoing development of the strategic BRICS partnership during Russia’s current chairmanship. The organisation has reaffirmed its ability to respond flexibly to the changing international situation. Through joint efforts, we have preserved the continuity and stability of all areas of our cooperation. Over 150 joint events will take place throughout the year, albeit many of them online.

The New Development Bank (NDB) is working at its fullest. Approximately 60 projects in our countries totaling about US $20 billion have been approved. The NDB has responded to the pandemic in a timely and effective manner and announced the creation of a special lending mechanism to deal with the aftereffects of the coronavirus infection. In total, $4 billion have already been allocated for projects to assist in the recovery of the BRICS economies, with the entire aid package potentially reaching $10 billion.

Notably, the first Russian COVID-19 vaccine “Sputnik V” was recently registered. Russian researchers have developed medicines against the coronavirus infection. We are ready to share our experience with other countries, including our BRICS friends.

Relying on our partners’ support, we plan to approach the end of Russia’s BRICS chairmanship with a strong set of new agreements, including the already agreed upon BRICS Anti-Terrorism Strategy and the updated Strategy for Economic Partnership to 2025. A number of initiatives advanced by our chairmanship to strengthen sector-specific cooperation between BRICS members are at the final stages of development. The people-to-people and cultural ties, as well as contacts between experts and civil society representatives are expanding.

Importantly, BRICS and all of our countries are invariably open to interaction with constructively-minded partners. Our association has become a centre of attraction for many participants in international relations, primarily from among the developing economies and emerging markets.

I’m convinced that BRICS can and should take an active part in shaping the global architecture in the post-coronavirus world.

Today, we will discuss the interaction of the BRICS countries on important issues on the international agenda, as well as the expected results of Russia’s BRICS chairmanship in 2020.