The videoconference was attended by government officials and representatives of public and business structures focused on interaction and development of SMEs.

Russian and international experts representing Line agencies and departments exchanged experience and best practices on using digital technologies for the development and support of SMEs. The participants also reviewed the main steps to ensure successful digitalization of this segment of the economy, the state regulation tools that are most popular among entrepreneurs and the principles for evaluating the results of the taken measures.

The experts paid special attention to two main issues: the digital transformation of administrative and tax services and the creation of the necessary conditions, as well as the promotion of the digitalisation of small and medium-sized enterprises.

“The interaction of the BRICS countries on the support and development of SMEs is an excellent opportunity to achieve the growing potential of the economies of BRICS countries”, Mr Kirill Sergashov, Deputy Director of the Investment Policy and Entrepreneurship Development Department at the Ministry of Economic Development stated in his opening remarks. “At the same time, today we can see that digitalization is fundamentally changing the business model. Undoubtedly, digital technologies improve the business landscape and are a source of new jobs, increased innovation efforts, stronger international relations and support for the export potential of SMEs. Our countries can clearly see the fundamental importance of the transition of SMEs to the digital economy”.

The Russian Side proposed to analyze the level of digitalization of the government structures of BRICS countries. This information could serve as a basis for further steps to create a “one-stop” digital platform for SMEs in Russia. Such a platform would greatly simplify the paperwork when interacting with taxa and administrative services, and would also boost business activities. The representatives of Russia noted that the country is willing to share its experience in developing such a platform with BRICS partners. 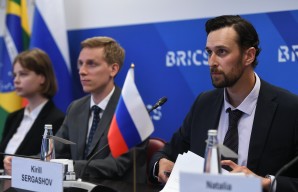