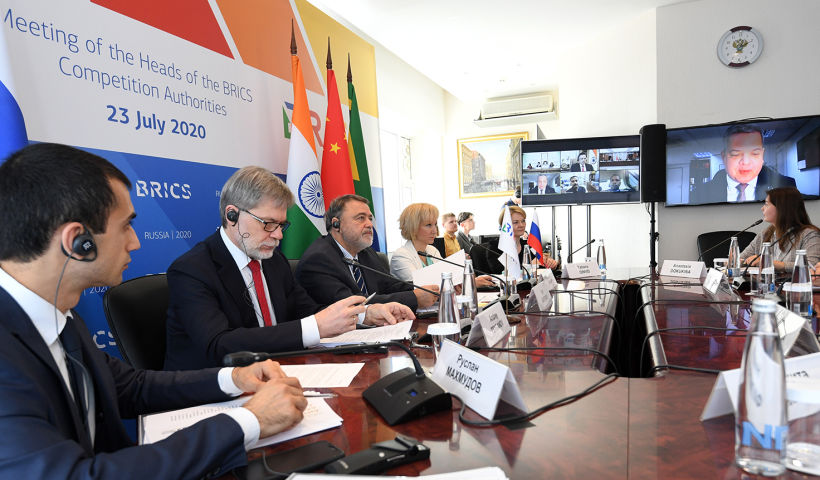 On 23 July, Mr Igor Artemyev, Head of the Russian Federal AntiMonopoly Service (the FAS Russia), chaired the Meeting of the Heads of BRICS Competition Authorities via videoconference.

The participants discussed the impact  of the coronavirus pandemic on BRICS markets and measures to maintain a healthy competitive environment under the current circumstances. They also discussed the initiative to adopt the Model recommendations on the use of waivers (information confidentiality waiver) when coordinating global economic concentration transactions within BRICS, as well as other topical issues related to cooperation between the competition authorities of the five countries on the relevant international platforms.

“Coordination between our agencies has reached a high level. We can hold joint consultations and carry out investigations, and I would like to thank my colleagues for this. We have signed the Declaration by the Heads of BRICS Competition Authorities so that Memorandum of Understanding on Cooperation in the Field of Competition Law and Policy among the BRICS Competition Authorities remains in force for an indefinite period. This was the first document signed by the five countries within the 2020 Russian BRICS Chairmanship, which indicates the commitment by the BRICS regulators to facilitating and enhancing cooperation between our countries on competition affairs,” Mr Artemyev pointed out.

Assisting phased efforts to restore economic activity under the pandemic restrictions being lifted became a separate item on the meeting agenda. The Heads of the BRICS Competition Authorities adopted a Joint Statement on consolidating efforts to fight the negative economic consequences of COVID-19.

In addition, the participants discussed preparations for the 8th United Nations Conference on Competition and Consumer Protection, which is expected to include the adoption of guidelines and rules for international cooperation. The partners also supported the initiative put forward by the Russian Federal AntiMonopoly Service on including the issue of fighting cross-border cartels on the next five-year agenda of the UNCTAD Intergovernmental Group of Experts (IGE) on Competition Law and Policy. 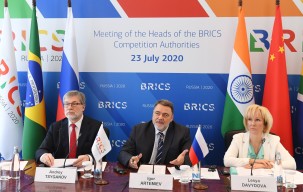 Meeting of the Heads of the BRICS Competition Authorities