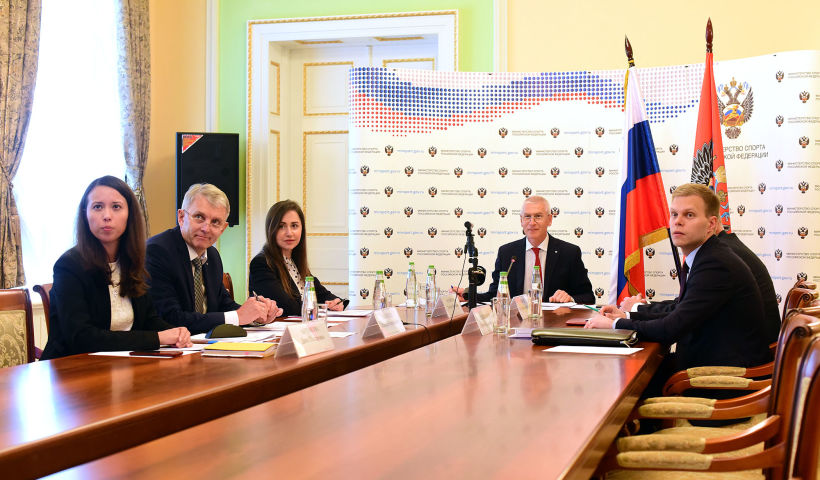 On 25 August the first Meeting of the BRICS Sports Ministers under the Russian BRICS Chairmanship took place via videoconference.

In his opening remarks, Oleg Matytsyn welcomed his colleagues and pointed out that this year would go down in history due to major changes in people’s lives because of the novel coronavirus infection. He noted that this period had reaffirmed the special unifying mission of sports and helped to further consolidate the sports community and define the main tasks and resources for further development.

The participants discussed topical issues of cooperation in the field of sports, in particular, the organisation and holding of sports events during India’s BRICS Chairmanship in 2021. The Russian Side expressed readiness to share experience and to provide necessary support to the Organising Committee of the Winter Olympic and Paralympic Games to be held in Beijing in 2022.

“We have held our first meeting, which is an important result as it is,” Oleg Matytsyn told the media. “The Russian Federation is conducting an extremely open policy in the sports sphere. BRICS is an effective format. The top sports officials of the BRICS countries have expressed readiness to boost interaction not only in sports but also in the fields of scientific research, humanitarian cooperation and combating doping. Of course, the adoption of the Memorandum of Understanding has formalized these agreements.”

Following the meeting, the Ministers approved a Memorandum of Understanding on Cooperation in the field of Physical Culture and Sport between the relevant BRICS Line Agencies. The document provides for cooperation in the following areas: holding annual BRICS Games in the country of BRICS Chairmanship; exchange of athletes, coaches and sports experts; encouragement of athletes to participate in international sports events held in BRICS countries; cooperation in the field of high performance sports, mass and recreational sports; development of national, traditional and non-Olympic sports; exchange of views on issues of mutual interest in the field of physical culture and sports discussed at international venues; exchange and systematization of the results of research projects; and exchange of information on the introduction and maintenance of sports infrastructure facilities.

“We have been working on the |Memorandum for a long time, so that now it creates a platform for the implementation of our joint projects,” the Russian Minister of Sport said. “These projects include BRICS Games, which have not been held, regrettably, in Chelyabinsk this year because of the spread of the coronavirus infection. But our colleague from India, which will assume the BRICS Chairmanship next year, has reaffirmed his country’s readiness to host the Games. It is an extremely important aspect of our interaction, because the Games will attract young athletes who are a huge factor in uniting our countries and demonstrating our concern for the future generations. In addition to this, the Memorandum oulines the areas of cooperation related to the development of research projects, education technologies, joint competitions and exchange of coaches.”