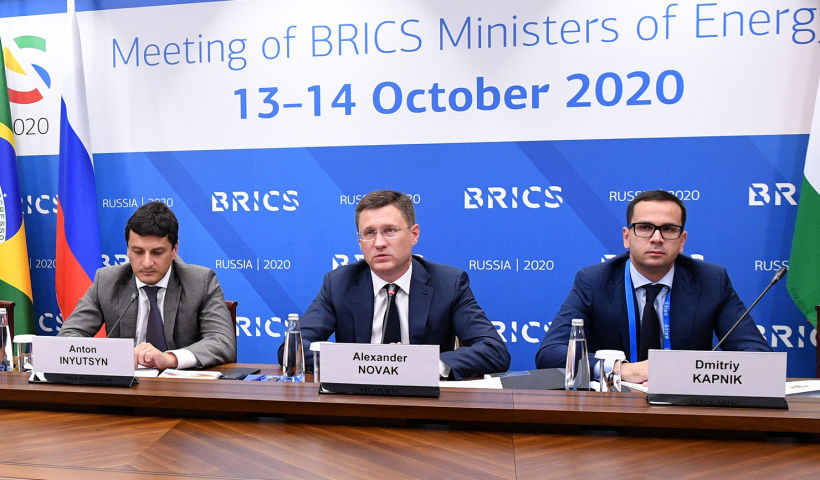 On 14 October, Alexander Novak, Minister of Energy of the Russian Federation, chaired the 5th Meeting of BRICS Ministers of Energy via videoconference.

The Heads of the relevant Line Agencies of the five countries summed up the interim results on the main areas of cooperation in the energy sector: support for the development of national energy systems in the BRICS countries; technological interoperability and facilitating investment in energy; promoting the stability of energy markets and enhancing the role of BRICS in the global energy dialogue.

The Ministers discussed the prospects for the industry’s recovery from the consequences of the pandemic; praised the work of the Committee of BRICS Senior Energy Officials and Working Group on Energy Saving and Energy Efficiency, and youth energy cooperation. They also noted the effectiveness of the informal consultations format between the BRICS countries on the sidelines of the G20 and World Energy Council.

The Head of the Russian Ministry of Energy noted that the global energy sector has been showing stability lately, and in this context, coordinated actions of the international community, in particular the BRICS countries, are of particular importance.

“Our cooperation is based on the complementary nature of our energy strategies. Undoubtedly, the influence of the BRICS countries on the international arena is increasing due to the growing economic might of the participating states: the BRICS countries currently account for almost a quarter of the world's GDP, and more than a third of world energy consumption and production. In this regard, it is very important to coordinate our countries’ positions where we have common interests and to speak on international platforms with a unified position on international energy cooperation,” Alexander Novak said.

An important part of the Meeting was the presentation of the first studies of the BRICS Energy Research Cooperation Platform, devoted to the development of the energy sector in the five BRICS countries and technological cooperation. The research done helped not only to present our countries’ coordinated energy development priorities to the international community, but also to work out a working mechanism for conducting joint research, to stimulate each country to explore its own development opportunities within BRICS and evaluate prospects for interaction with the other BRICS countries.

“Today we have witnessed a very important event in the history of the energy dialogue between our countries. Experts from the BRICS Energy Cooperation Platform presented their first joint research. In fact, this is the first joint statement of the BRICS countries on our vision of our role, as a group, in the global energy sector,” Anton Inyutsyn, Deputy Minister of Energy of the Russian Federation said.

The Energy Ministers approved the “Roadmap for BRICS energy cooperation up to 2025”, the first comprehensive document that formalized the agreed plans for the development of the energy dialogue of the five countries. The Energy Ministers also adopted a Communiqué, in which, among other things, they reaffirmed their intention to strengthen strategic partnership in energy and energy security, highlighted the important role of all types of energy, including fossil fuels and nuclear energy. The Ministers also reaffirmed that the energy transition needs to be adjusted to national specifics, and each country should be able to determine its optimal policy, instead of using any imposed models that are not suitable for the BRICS countries. 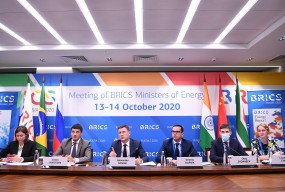 Meeting of BRICS Ministers of Energy