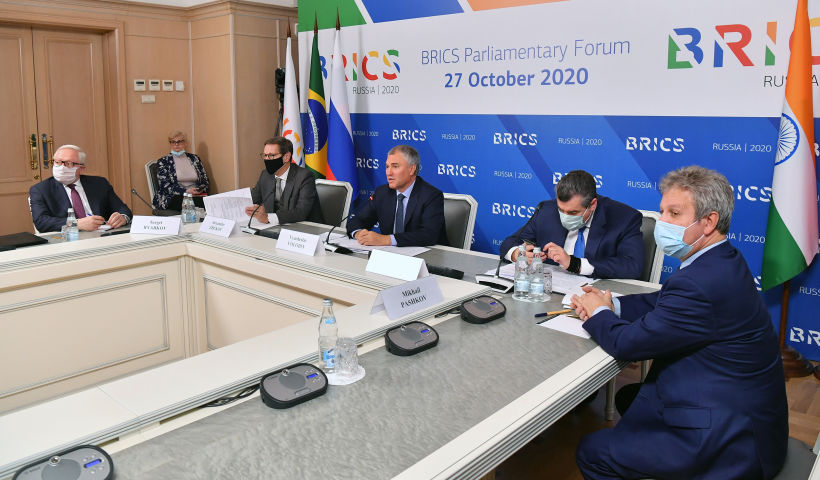 On October 27, the Sixth BRICS Parliamentary Forum under the theme “BRICS Partnership for Global Stability, Shared Security and Innovative Growth: Parliamentary Dimension” was held  via videoconference.

Vyacheslav Volodin emphasized the need to create a mechanism for BRICS parliamentary cooperation, and urged all colleagues from the BRICS countries to counter political confrontation in combating the pandemic. “It is time to create a regular mechanism for BRICS parliamentary cooperation that will be convenient for all its members,” Volodin said in his speech.

“Our countries have accumulated great potential that can be opposed to manifestations of national egoism. For example, our work on the Strategy for BRICS Economic Partnership 2025 is now being finalized. The BRICS Counter-Terrorism Strategy has been approved. A fondumental unified position of the Heads of State and Government of the BRICS countries plays an important role in promoting international cooperation,” Valentina Matviyenko said.

The following representatives of the BRICS parliaments took part in the Forum: Speaker of the Lok Sabha (House of the People) at the Indian Parliament Om Birla; Chairperson of the Standing Parliamentary Committee on Chemicals & Fertilisers at Lok Sabha Kanimozhi Karunanidhi; Chairman of the Standing Committee of the National People’s Congress of the PRC Li Zhanshu; Speaker of the National Assembly of the Republic of South Africa Thandi Modise, Chairperson of South Africa’s National Council of Provinces Amos Masondo and Vice-President of the Commission for Foreign Relations and National Defense of the Federal Senate of the National Congress of the Federative Republic of Brazil Marcos Do Val.

The parliamentarians held an in-depth discussion of  the issues of promoting and strengthening cooperation, including at the inter-parliamentary level and the problems of countering the COVID-19 pandemic, as well as the challenges and threats that each state is facing today under these conditions.

Speaker of the Lok Sabha (India) Om Birla urged the participants to institutionalize the BRICS Parliamentary Forum as soon as possible. He said the participants shouldconsider taking further steps towards this goal because the Forum is a suitable venue for cooperation between the BRICS countries so as to make it an inter-parliamentary result-oriented body, he said.

Chairman of the Standing Committee of the National People’s Congress of the PRC Li Zhanshu presented several recommendations on economic recovery, as well ascountering the negative consequences of the COVID-19 pandemic. He said the BRICS parliamentarians should take responsibility to stabilize the economies of their countries to accelerate global economic recovery.

“I have several proposals for this. First, the legislative bodies should strengthen cooperation in the field of public health and provide legal protection for epidemic prevention and control. Second, we should strengthen cooperation in the fight against coronavirus infection, as well as exchange information and best practices, and work on the development of new vaccines. Third, it is necessary to provide support to the WHO and to the WTO to promote trade and mutual investment,” he said.

“The COVID-19 pandemic is a serious test for all of us, but it is also a test of our strength. The pandemic has opened up many new opportunities; we should take advantage of the situation,” said Speaker of the National Assembly of the Republic of South Africa Thandi Modise.

“All the necessary measures were taken to mitigate the impact of the pandemic in South Africa. But the economy of our country has been seriously affected. We would like to thank the BRICS states that provided assistance to South Africa during the pandemic. The pandemic helped us to build closer relations with Russia and China, as well as with India,” she said.

In conclusion, Vyacheslav Volodin thanked his colleagues for their interest in the further development of BRICS parliamentary cooperation. 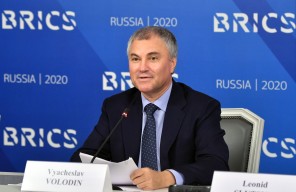