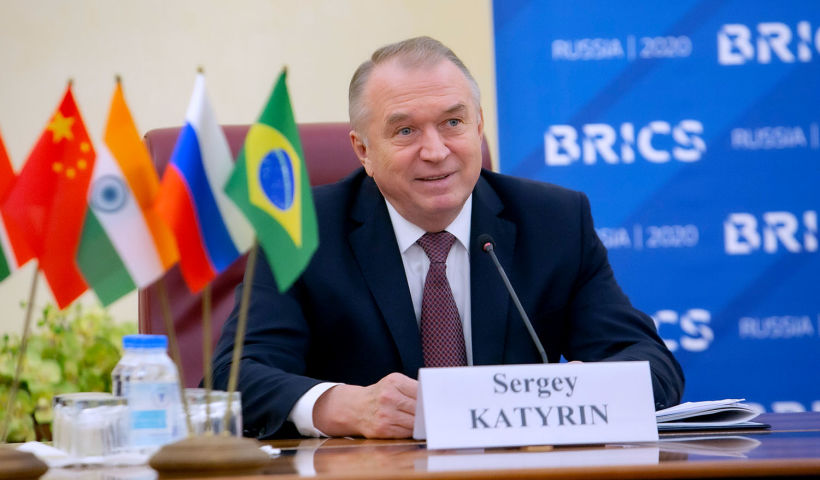 The main issue on the agenda was the review and approval of the annual report by the BRICS BC.

While opening the meeting, Sergei Katyrin noted that the experience of the Business Council this year showed that against the backdrop of the crisis BC demonstrated a desire to work together to build and deepen business contacts within the BRICS countries, as well as to search for new drivers of economic growth.

“The BRICS BC has successfully coped with the challenges of the pandemic through joint efforts and mutual assistance. Despite the trying times, we managed to work effectively and achieve positive results. At the end of July, BC held an extraordinary meeting and adopted a joint statement on the spread of the COVID-19 pandemic, reiterating the willingness of business of the BRICS countries to take an active part in developing measures to overcome the emerged obstacles in trade and economic cooperation. A large-sale BRICS Business Forum was held via videoconference. Throughout the year the Council’s 9 Working Groups maintained productive dialogue in all areas of their activities. These Groups have done a lot in this regard, and the draft annual report of the BRICS BC will comprise of the main outcomes of their activities and their recommendations,” said Mr Katyrin.

In particular, the participants discussed the development of aviation and airport infrastructure, as well as waste disposal. They emphasized the need to remove excessive barriers that have appeared due to the pandemic, which is particularly important for small and medium-sized companies. They paid special attention to the development of the digital economy and ways to increase the digital literacy. They noted the need to strengthen cooperation in the finance sector, enhance cooperation with the New Development Bank, as well as to develop the insurance and reinsurance systems.

The Chairpersons of the National Chapters of the BRICS BC: Jackson Schneider (Brazil), Onkar Kanwar (India), Xu Lirong (China) and Busi Mabuza (South Africa) – made comments on the recommendations of the BC Working Groups.

The annual report was endorsed by all Chairs of the BRICS BC National Chapters. The final version of the report included 36 recommendations on the further development of cooperation between the BRICS countries in the following areas: industry, infrastructure, the digital economy, energy and the green economy, aviation, the removal of administrative barriers and professional training.

Mr Katyrin will present the report on the work of the BRICS BC in 2020, as well as on the main provisions of the annual report to the Leaders of the BRICS countries at the BRICS Summit on 17 November.

Onkar Kanwar, Chairman of the India Chapter of the Business Council and Chairman of the BRICS BC in 2021, gave the concluding speech. The next meeting of the Chairs of the Council’s National Chapters will take place in India.