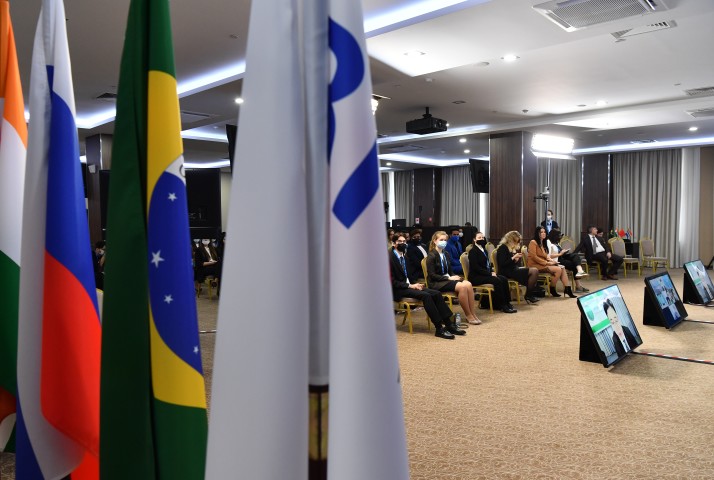 On 1 December, the city of Ulyanovsk hosted the Meeting of BRICS Ministers and Heads of Departments for Youth via videoconference.

“The key initiative implemented by our country in the youth dimension of BRICS cooperation is the launch of the Russia-BRICS International Youth Cooperation Project Office in the city of Ulyanovsk, which is designed to unite the efforts of federal and regional government bodies, non-government organizations and student community in order to support the systematic interaction of Russia’s youth organizations and BRICS ones. Every year, the Project Office will implement a number of projects and programmes in the areas of cooperation that are important for the BRICS countries, including the BRICS International Camp in the Ulyanovsk Region”, Alexander Bugayev, Head of the Federal Agency for Youth Affairs, noted.

During the Ministerial Meeting, the Heads of the BRICS Ministries and Line Agencies for Youth Affairs discussed the proposals of the Summit participants to further expand cultural cooperation within BRICS. Representatives of the five Line Agencies also highlighted the importance of the volunteer movement in fighting against the coronavirus pandemic and expressed confidence in the need to create a set of mechanisms within BRICS  that would facilitate the exchange of experience among young people in the volunteer movement.

Following the meeting, the Heads of the BRICS Ministries and Line Agencies for Youth Affairs approved the Declaration of the 6th BRICS Youth Summit, which comprises theproposals for developing cooperation within the BRICS youth dimension in volunteerism, entrepreneurship, official and people-to-people diplomacy, energy cooperation and creative industries, as well as the Concept for the Development of Cooperation among BRICS Countries in Supporting the Youth Volunteer Movement

The Sides supported the initiative to create an International IT Valley in the Ulyanovsk Region and to launch the work of the BRICS Youth Laboratory of Creative Industries.

BRICS youth to discuss the further development of humanitarian cooperation