St Petersburg has been selected as the venue of the BRICS Summit under an executive order of the President of the Russian Federation.

St Petersburg is the second most populous Russian city and the largest non-capital city in Europe.

The historical centre of St Petersburg and palace and park ensembles in the environs are listed among UNESCO’s World Heritage Sites.

The northerly St Petersburg is famous for its White Nights, a major tourist attraction.

Although St Petersburg, which was founded by Peter the Great in 1703, is the youngest European city, it has changed its name three times since then. From 18 August (31 August according to the Julian calendar) 1914 until 26 January 1924, it was called Petrograd. From 26 January 1924 through 6 September 1991, the city’s name was Leningrad.

The city is located on the eastern shore of the Baltic Sea’s Gulf of Finland and has an area of 1,439 square kilometres. St Petersburg also boasts more bridges than any other European city. There are 93 rivers, including tributaries and canals, 170 kilometres of embankments, 42 islands and 800 bridges in the city and its suburbs. 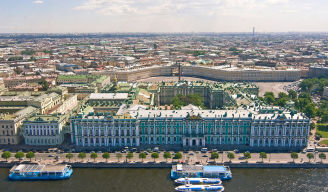 St Petersburg, the host city of the 2020 BRICS Summit